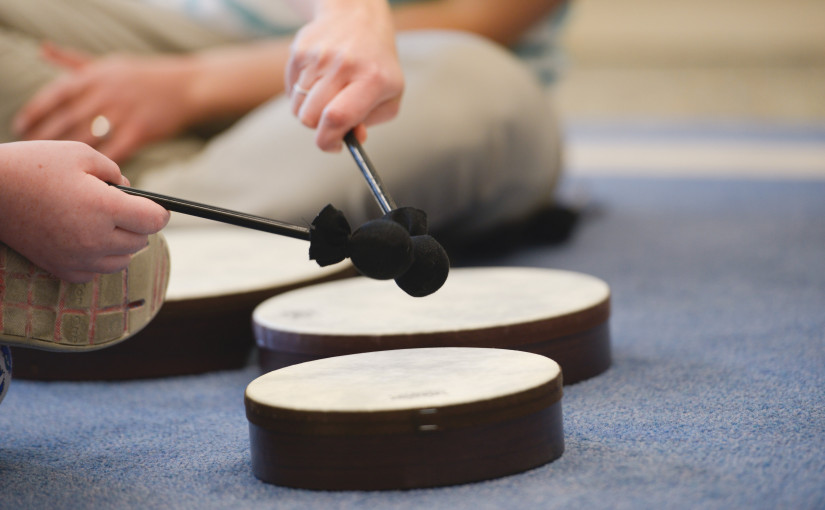 Music therapy is a powerful tool in helping people connect. From children to older adults, it can make all the difference.

One of my favorite parts about being a music therapist is seeing the people with whom I work begin to connect with others in meaningful ways. I use music to address a wide range of needs, but one of the most pertinent needs across the board is that of connecting with another person, as well as with one’s own self and personal history. Whether it is an individual with Autism, a teen with mental health issues, or an adult with dementia, music can be a catalyst for connection in a deep and meaningful way. I’ve seen this happen in all each of these settings, and in each case I am in awe of the power of music to foster such connection.

Connecting with individuals with Autism

I worked with a young boy with Autism who spent the majority of our session wandering the room. He seemed to have no desire to interact and no apparent need to connect with others in a visible way. This was of course very difficult for his mother who wanted nothing more than to have meaningful interaction with her child. During our music therapy sessions I presented everything I could think of: drums, pictures, kazoos, favorite songs, toys, books…but nothing seemed to bring him out of his own world. He wandered around making no eye contact or acknowledgement that he knew I was there. Then one day I happened to pull out the thunder tube. The moment I played the instrument he stopped in his tracks and looked at the instrument for several seconds. He then resumed pacing around the room. I waited a moment and played the thunder tube again and this time he looked directly at me. This developed into game in which I only played the tube when he looked at me or the instrument.

His mother was thrilled to see him respond. I gave her the thunder tube during the session and she used it in the same way I had, and was finally able to experience long awaited moments of connection with her sweet little boy. This led to a variety of other experiences in which he learned to connect with his mother through music.

Karen Hook, a Registered Music Therapist shows more of how music therapy can foster connection with children with Autism in this video below.  You can learn more about her work at www.karenhook.com.

While working at a Residential Treatment Center for teenage girls I had opportunities to do 1:1 sessions with several of the girls. One resident in particular relied heavily on music as a way to express herself and connect with others. While she struggled in traditional therapy, she thrived in music therapy as she was able to put her emotions and experiences into song. She loved writing music and willingly shared her compositions with me during our sessions. We were able to connect in beautiful ways as she opened up her world to me through song. In some sessions I simply listened while she played. Other times we created music together. And in some sessions we both listened to songs by her favorite artists or to those she had previously recorded. Through our connection she began to gain a sense of trust and began to open up in other settings. It was truly an honor to work with her. I’ve included a recording below of one of her original songs which she titled “They Haunt Me”.

I worked with a 92 year old hospice patient several years ago who was first referred to music therapy because he had become non-responsive to all other services. During our first session he sat on the couch with his head down and did not move for the first 20 minutes as I experimented with playing various types of music. I eventually moved into playing some Jazz tunes, and within the first few chords of the popular “Five Foot Two, Eyes of Blue”, this sweet man slowly lifted his head, looked up toward the ceiling, and began to scat (vocal improvisation with wordless syllables). His eyes lit up and his hands and feet began to move in time with the music in a way that seemed to make connection not only with the song, but with a rich past. I learned that he had been a trombone player in a jazz band in his youth, and this music brought him back to that time in a very real way. As we continued to make music together he would look right at me and sing along with words that he knew well, and the power of this renewed musical skill was evident in his affect and interaction. We connected to each other, he connected to his family, and the music held us all together in a most beautiful and joyful space. As his life came nearer to a close, the music was more and more important in fostering connections that could not be made with words, but which were truly felt and experienced during the musical experience.

One reply on “Connecting Through Music Therapy”