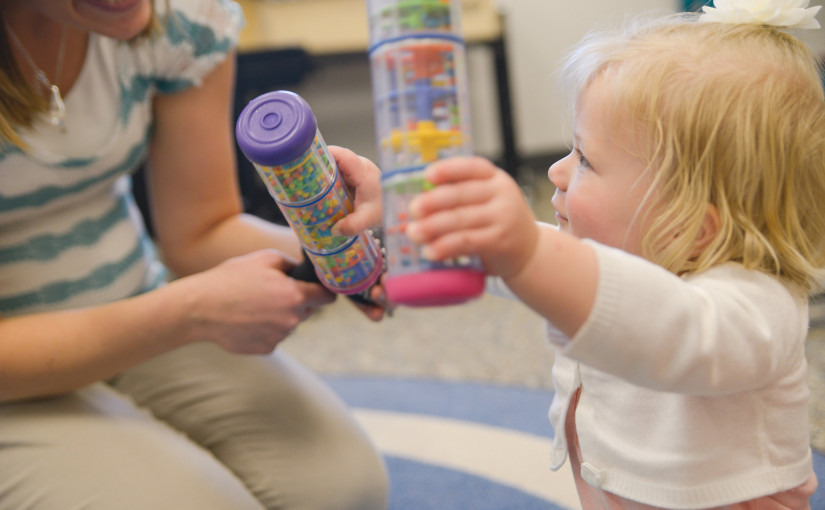 How to Help Special Needs Children With Object Play

In my days I have worked with many special needs children who just LOVE to throw things. Give them a toy and they throw it for the sheer thrill of it, or in some cases just for the pleasure of seeing someone else pick it up (one of my clients used to giggle every time someone bent over, so of course she tried to make that happen as often as possible!).

Most of the kids I’ve worked with who throw consistently have been nonverbal and diagnosed with a severe or profound disability. I’ve come to look at the function of throwing in a few different areas–Sensory, Emotional, and/or disinterest. I’ll briefly describe how the throwing behavior stems from each of these areas, then discuss how a music therapist may address the issue and lead to increased success in object play, with a natural decline in throwing.

Sensory Needs
First off, a special needs child who is in his own world may throw an object solely for the Sensory experience. This may be found in the proprioceptive feedback of the throwing motion (the way it feels to have something in your hand one moment and flying across the room the next), or perhaps the visual stimulation a flying object provides.

Emotional Needs
An emotional reason for throwing may be frustration (this is a common one). If a child desires to avoid or escape a certain task he or she is being asked to do (or wants to do but can’t quite get it right), he or she may become frustrated and throw the object(s) in question. This is a pretty normal response, I mean who doesn’t feel like throwing the computer out the window sometimes when it’s not working the way it should? I know I’m guilty. Of wanting to, that is…fortunately I have the skills I need in emotional regulation to either walk away from the computer or take a deep breath. Many special needs children need help in developing those skills in emotional regulation.

Disinterest (Needs in understanding Object Play)
Another reason may be due to not knowing what to do with the object in the first place (which may also be a cause of the aforementioned frustration). I find that this is more common than we may think. Many children with Autism lack skills in pretend play, and instead of pretending that a toy truck is driving down the road, they may become enthralled with the way the wheels spin, the way it looks moving back and forth in front of their face, or, of course, the way it looks flying in the air across the room. I believe that this lack of inherent skill in pretend play can lead a child to essentially become disinterested or bored in his or her surroundings, and therefore choose to put off any object that is presented by another individual.

Whether the reason for throwing is due to sensory needs, frustration, or disinterest, music therapy can play a key role in helping special needs children develop the skills of sustained attention to an object, which will naturally decrease the throwing behavior if done right. I’ve worked with many children over the years whose goal was to “increase functional use of objects”. This was often in tandem with the Occupational Therapist, and we would work together to develop ideas and create positive experiences for the individual. I will outline the general process I have gone through to help develop this skill–all using music, instruments, and music therapy techniques.

Goal 1.0 Increase functional use of objects

Objective 1.1 Hold an item for ________ (length of time) *Increase the required length of time as the child masters each step*

The first objective is usually that the child will “hold an item for 10 seconds”, or whatever length of time is most appropriate for that child. They don’t even have to play with it at first–just hold it–while the objectives increase the required time in gradual increments. The way I use music during this stage is as a temporal cue. I ask the child to hold the item for the length of a preferred song, often starting with short songs or even portions of songs if necessary. I’ve found that while I am playing the music and engaging affectively with the child, they almost forget that they are holding an item because I have drawn their attention elsewhere. Once the song is over they are free to put the object down, and I ask them to either put it in my hand or set it on the ground. If they do happen to throw it during the song, I stop singing, give them another item, and start over (I try not to give the satisfaction of the child seeing me pick up after them, but rather have a whole bucket of instruments to draw from). If they throw it after the song is over, I ignore the behavior and praise them for holding it while I sang. The whole process should be fun and lighthearted, which is naturally aided by the fact that you are singing the child’s favorite songs!

The purpose of this objective is to address the “disinterest” root for why a child may be throwing. If a child develops the skills to engage effectively with an item, they will naturally be more inclined to sustain attention to that item because they know what to do with it. And, hopefully, they enjoy the result of their play. The key in this step is finding what items are most interesting to the child and working with those first. One child I worked with automatically threw anything that was small (such as shakers, bells, etc.), and tried to throw large items (such as a gathering drum or autoharp), but as I persisted with the large items and made it impossible for her to throw them (by securing them down), she gradually began to show sustained interest and interacted with the instruments once she realized she could not throw them. Over time she truly came to enjoy making music on the drum and autoharp, and even held a drum mallet and played the drum for several minutes at a time (which is something she used to throw the second it touched her hand).

The beautifully inherent thing about instruments is that they are fun and interesting to play with because they make noise. We can use this to our advantage by asking the child to participate in a music-making experience while we either play the same instrument (supporting the child with full or partial physical prompts), or support their play with the guitar, piano, voice, or other harmonic instrument.

Obj. 1.3 Demonstrate functional use of non-musical toys or items

Once the child demonstrates the ability to engage effectively with instruments and musical items, the natural next step is to help him or her learn how to functionally use other items they may have chosen to throw previously. This may include using utensils, books, toys, etc. This should be based on the child’s interests, and may require elements from the first objective (i.e. sing about the item). The purpose of the music up to this point has been to help the child learn to tolerate holding an item, develop sustained attention, and to provide them with a successful experience in using an item functionally.

I’ve had several parents report that after having music therapy, their child began to hold on to items (such as utensils) and play with toys much more purposefully at home. It is so exciting to see these kids develop a basic skills that has a drastic impact on SO many other areas!